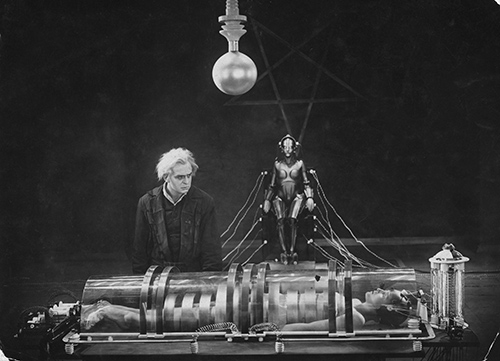 What’s this fascination with Iron men, Robocops and Transformers about?
Our ancestors imagined a symbolic bond between man and the natural forces through mythological creatures such as sphinxes, minotaurs, centaurs or fauns. Part man, part animal.
Now we fantasise on the cyborg, which is the fusion of man with his own tools. Odd, isn’t it?
The phenomenon is unprecedented and pretty much just a century old, but how did this start?

Technology is the name we give to any man-made tools, but only in the past decades we’ve seen tools gradually mutating from objects we hold in our hands to devices that can be inserted into our bodies (sexual allusions are not accidental).
Telephones got in our homes, then in our pockets, lastly in our ears. What’s next? 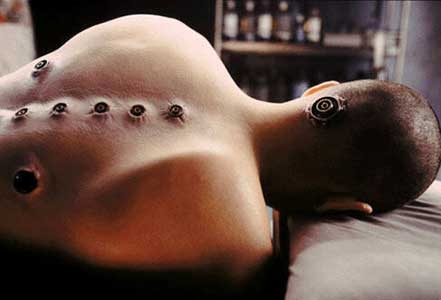 We walk in the streets with our senses artificially stimulated by cables bombarding our eardrums with music, touch screens for our fingers, images for our eyes and artificial sweeteners for our tongues. More and more intimate, as David Cronenberg metaphorically suggested in movies like Existenz.
And the most incredible thing is that we consent to all of it.

To understand the origins of all this we have to jump back a bit, to 1859.
In 1859 Charles Darwin published a book titled “On the origin of Species”, something you might know. But what most don’t remember is the subtitle to that: “or the Preservation of Favoured Races in the Struggle for Life“.
Carefully read that again, especially between the lines.

Darwin’s cousin, Francis Galton, understood the social importance of Charles’ studies and took the theory of evolution to the next level by fathering the eugenics theory, that is evolution through artificial selection, quickly adopted by Great Britain, France and beyond.
The industrial age added an extra gear (almost literally) to the Darwinian ideas of “progress and evolution” and shortly we ended up with transhumanism.
And of course it didn’t end there: GMO, geo-engineering and so on. All aspects of the same mindset. 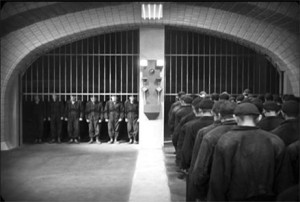 Transhumanism is a movement promoting the quick advancement of the human race through technology. They can’t even wait for natural “evolution” to happen.
“Preservation of Favoured Races in the Struggle for Life“, remember? But who decides?

Among its greatest advocates we find individuals like Ray Kurzweil (Google’s director of engineering) who is so afraid of death that he desperately dedicates his life to finding ways of transferring his memories into a machine to live forever or at least much longer (good luck). He thinks that would to the trick. And he’s not the only one thinking along those lines.

But what does that means for us, poor mortal consumers?

The idea of “evolution through technology” has been seductively introduced and sold to us in quite a number of ways. Our modern culture finds pride in rampant scientism, celebrated in Discovery Channel shows and the likes, always presenting humanity as a gullible simian automaton. But let’s not forget the role of advertising, movies and comics. 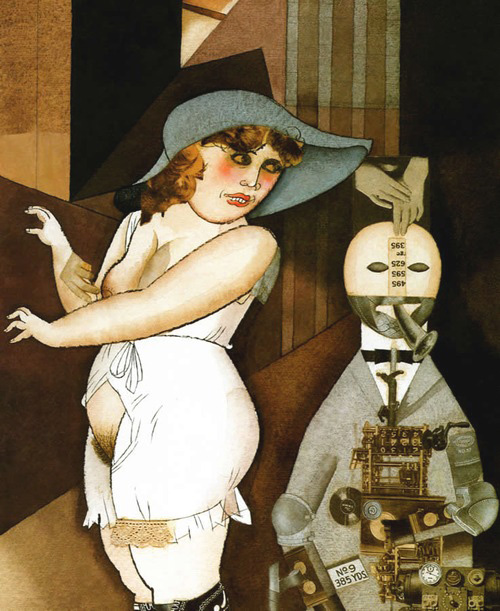 It’s in this light that we have to put the high-tech Frankenstein monsters that dominated the sci-fi genre (a new phenomenon in itself). From Fritz Lang’s Metropolis to Astroboy, from the Bionic Woman to Terminator and Ridley Scott’s Prometheus the examples are so many that I certainly don’t need to make a list.
But the almighty trick of advertising has always been sex. Make technology sexy and it will sell like candies.

(I guess I don’t need to comment on the machine gun in the image above, but I’ve touched on that subject in the post “The Red Sonja complex“)

We are now to the point where it’s acceptable or even cool to be perceived as hollow dolls to be filled up with projected sexual fantasies of all kinds.
Teenagers acting and dressing like pop idols and Barbie dolls, vain plastic surgery, “politically correct” esthetic values to make us “likeable” according to established standards.
Empty mechanical bodies that simply have to serve two collective functions: work and sex.
Produce and reproduce for society, and if you’ll ever feel stressed all you’ll need is a tickle.