After all we’ve analysed here’s a final portrait of the witch.

Physically witches are often represented as very old, ugly, with saggy breasts, solitary but in tune with flora and fauna. Sometimes they even appear as animals.
Occasionally they can be benevolent, by offering gifts to a hero and help him along his journey. Either way, there are no stories without witches (or their implicit presence), because they are the necessary gateway of inevitable transitions and realizations.
We can now understand that witches in stories don’t represent evil exclusively, but an untamed motherly force.

They are the undying feminine principle of chaos that intervenes to break the rigid structures and cages of patriarchal hierarchy (order). They are the primordial mother who destroys in order to regenerate, like the Hindu goddess Kali.
In doing so the cycle of life is preserved.
Once they complete their job they go back to the forest where they belong.
In short, witches are tricksters who set change into motion. 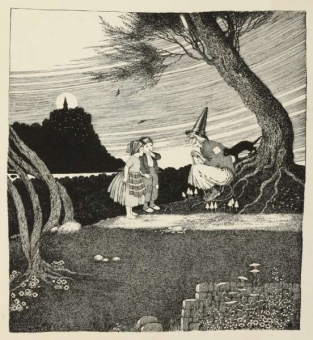 Up to now we probably thought that witches are harmful and always evil, also “thanks to” Hollywood movies in which they are often characterised as psychopaths, but after studying how folk tales are narratively and symbolically constructed we can start to think otherwise.
The negativity aspect has not to be understood as “bad”, but rather in terms of polarities: yin and yang.
If we say that the feminine is the negative aspect, we mean that in archetypal terms it represent the passive, hidden, obscure force of the unconscious. Moreover, it has nothing to do with women in the sexual sense, because both men and women have feminine and masculine sides.

Too often these days we hear rhetorical speeches about “positivity”, especially from the New Age movement and affiliate ideologies that misinterpret Hindu philosophies and try to heal “negativity” through a “positive” collective response.  But the shadow has to be faced individually for harmony to occur, as folk tales, myths and dreams teach us.

“One does not become enlightened by imagining figures of light, but by making the darkness conscious. The latter procedure, however, is disagreeable and therefore, not popular” – Carl Jung

Remember that you, like Dante, can be wise enough to know that the path to heaven starts in the dark depths of a cursed forest and that the journey is yours only.
You’ll eventually get to thank your Dark Moon for being a harsh but just teacher.
But be brave: she’s not pretty.