In the first part we’ve seen that dark forests can often be the symbolic expression of a force that we called the Dark Moon: that which casts a light on the unconscious, revealing its hidden and often terrorizing content. You can run or you can be brave and face it.

Now I’d like to see how the elements of the Dark Moon, the Forest and the Witch have been portrayed in the Sleeping Beauty tale by Disney.
Unfortunately too often mainstream movies are loaded with subliminal messages and deliberate ideologies, so I’m a bit reluctant when it comes to citing them, but the take on the Sleeping Beauty folk tale seems generally rather appropriate, even though simplified.
Nevertheless, I would still invite all viewers to apply critical thinking when watching mainstream films. Get used to decoding whatever they present.

The first thing to notice in the movie is the evident green moon the witch Maleficient leaves behind when she disappears. Earthy green is the color of the wild force of nature and its cosmic laws.

You might remember the very eloquent artwork by Goya entitled “The sleep of reason produces monsters”. When reason sleeps, nightmares awake.
Now, since monsters are imaginary projections of a mind that lacks reason, we can obviously understand that we are talking about a single mind.
The clue is also within the Beauty’s name: Briar Rose. A rose with thorns, like the very same needle that puts Rose to sleep. Two aspects of the same flower. Thorns, branches and roots are the earthy expression of the witch. Remember Dore’s illustration of the forest.

For this reason in both Snow White and The Sleeping Beauty the witch can be interpreted as the dark side of the princess herself. In other words: one is the reflection of the other.

“Mirror mirror on the wall…“

By reflection we mean imaginary. In other words an ideal self, like the one that Narcissus saw in the river. The title of our tale mentions “beauty”, hence vanity seems rather fitting as well, but let’s leave this analogy to another time.

The act of looking into a mirror can be compared to that of facing the shadow.  In daily life it might happen voluntarily through introspection or involuntarily during a moment of confusion and desperation. The latter is more terrifying, because the witch’s spells always take us off-guard. Spells (the content of the imaginary) can be fearful or can be charming, like in the case of Narcissus. Either way it’s painful.

Let’s now continue with the movie.
The princess faces her own possible death at the age of 16, which (occultist numerology aside) is the age of adolescence marking the passage to adulthood. And right after being crowned by the fairies she falls into despair, like the man in Goya’s work, logically in front of a mirror.

That’s when the green Moon of Maleficient appears and leads her up the spiral stairs.

Then the princess in a ghostly trance, pale like a corpse walks up the spiral stairs to her death.
Once the three fairies find the princess laying on the floor they look out the window and see the setting sun (death again).

So we’ve finally discovered the ultimate power of the witch: not only she’s an obscure aspect of our mind, but she also represents a doorway to the afterlife.
As Dante wrote: “So bitter is it, death is little more”
In myths and cultures (even modern ones) the rite of passage into adulthood (that is the welcoming of a child into the tribe) is signified by a ritual, a symbolic enactment of death and rebirth, as Vladimir Propp rightly pointed out in his study on the historical roots of Fairy Tales.
By afterlife we don’t mean physical death, but a transition.

To better understand this characteristic let’s look at the Tarot.
The Tarot once again symbolizes the Dark Moon very accurately, even though it’s simply been named “The Moon” (the astrological Moon being the High Priestess, not the Moon card).
In Crowley’s Thoth deck version of the Moon we see two Anubis facing each other, as in an imaginary reflection. Anubis was the dog headed Egyptian god of the afterlife. 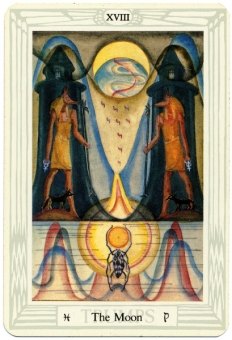 Below Anubis’ feet we see the classic scarab with the sun disc, but it’s under the horizon, meaning that the sun is Set, still in the abyss of the waters of Nu . For us there’s only darkness, confusion, uncertainty.
But in ancient Egyptian myths Anubis also weighs the soul to determine its destiny. It’s very significant because it shows the importance of this confrontation. Despite the terrorizing darkness there’s a sense of ominous divine judgment.
You’ll see the same symbols in Edward Waite’s deck and the tarot of Marseille.

While there’s nothing wrong with the Dark Moon or the unknown, we will either collapse in terror or face the demons and have a chance. Only then the sun might be reborn.
Not by chance the card of the Major Arcana that follows the Moon is card XIX, the Sun, and card XX is the Judgement.

One last thing that will help us understand the Moon tarot card is its associated astrological sign: pisces.
Keeping in mind the meaning of the card, I’ll leave the interpretation to you by simply showing this association:

Perhaps the amount of symbols and definitions we looked at can be confusing at first, but once we sum them all up we can easily deduce their common denominator. In other words: the archetype.
Let’s make a little list of key words we’ve found: darkness, forest, moon, thorns, black, green, reflection, unknown, confusion, death, afterlife.

These themes can be found in various and diverse contexts, if you think of the werewolf, the man who turns into a wolf once he sees the moon.
The reflective quality of the Moon also appears in Haruki Murakami’s novel 1Q84, a story of dualities and doubles under the mysterious presence of two moons in the sky, one of which is green.

The specularity of the two aspects of the psyche is also well portrayed in a scene of Star Wars, when Luke, during his training with Yoda, steps into a dark cave (like a forest) where he faces an imaginary Darth Vader. After Luke decapitates Vader, he discovers that the face in the helm was his own. His own “dark side”, or rather a projection of his own darkness onto an imaginary father figure.

Lastly we can’t forget the famous Orlando Furioso (Mad Orlando), the 16th century poem by Ludovico Ariosto, in which Orlando loses his beloved and consequently his mind. He goes insane and starts slaughtering people and destroying villages, until Astolfo recovers a vial containing Orlando’s “lost reason“. And where was it? On the Moon of course.

In the last part I’ll summarise and conclude this little journey.