Whoever has been reading comics, playing video-games or watching blockbuster movies for the past decades might have noticed these reoccurring stereotypical attributes of Female Warriors.

This icon might have more than one historical origin, but the most relevant modern incarnation goes back to 1973, when Barry Windsor-Smith gave flesh to Red Sonja, the barbarian woman featured in the Conan comic books. Actually the one who stripped the lady down to her chain-mail bikini was Esteban Maroto, even though she wasn’t wearing much before either.

1973 is a significant year because it’s right in the midst of the second-wave of the feminist movement, which was essentially about sexuality and woman’s role within the family.

Her story is also very significant: before becoming a feisty barbarian her family was killed and she was raped by brutes. She now baths in blood as the slayer of monstrous men.
Attractive and destructive at the same time.

Of course I’m taking Red Sonja as the culminating example of a specific social movement, but she had several precursors through the entire century.
As examples of the second-wave of feminism in the 60s we find characters like Vampirella, Poison Ivy and the Black Widow.
The names themselves reveal symbolic clues: poison, vampire, widow, black and red.
All these are evocative terms and take a direct shortcut to the subconscious mind.

Tolkien was probably aware of something more significant when he created Eowyn (from The Lord of the Rings), the lady who had to find great courage to step into the land of the Lord.
She had to do so cautiously disguising herself, because in a male driven world she wasn’t supposed to be walking where she didn’t belong.
However she did it by fully embracing her own nature in order to defeat the phantom patriarch.
“No living man am I!”, she said.
She wasn’t there to slay manhood nor take its role as a raging Red Sonja. She just stepped in to break a spell and take part in the restoration of balance, not to become a feisty barbarian.
She was more than a woman in the material sense. She was rather the embodiment of the feminine principle.

Now if we jump to present times we can understand why the iconic Red Sonja figure took over in our culture, growing as much as to dominate the entire fantasy genre, evolving even further in the entertainment industry and people’s mindset.

For decades media and the entertainment industry have been gradually diverting the image of women from the ideas of motherhood and the traditional family figure, to a more prominent and martial status, because the post-feminist woman is an independent entrepreneur, manager of her own body-mind.
So much so that many feminists consider motherhood as a biological curse.

Consequently all this ends up affecting men as well.
The view of men and women as opposites instead of complementaries is a reflection of this and keeps feeding the conflict (the “Men from Mars, Women from Venus” idea).
But as women take the stereotypical role of men, the opposite happens as well.

Nowadays sexuality is being deprived of its natural dualistic aspect.
What remains is sex for its own sake, a narcissistic genderless force glorified above all as the only possible encounter.
Sex is now a comparative value among people, a collectible trophy, a life purpose, an analgesic, a prosthetic replacement of relationships.
With the homogenization of male and female characteristics we are gradually assisting to the erosion of the family as the trine man-woman-offspring.

After 50 years Red Sonja morphed into a single lady of the Sex and the City, a lonely Desperate Housewife, but also a daring Lara Croft, an armed soldier, a sadomasochistic Lady Gaga beating men with a whip, when she’s not Pussy Rioting her way through political oligarchs.

However, since sex now hovers above all as a despotic pulsional entity, objectification of sexuality became an inevitable symptom.
Men are commonly blamed for seeing women a “objects”, but isn’t the responsibility mutual?
Red Sonja’s attractive weapon turned against herself and made her a lifeless doll for male sexual fantasies, because the first who lost her own femininity was Sonja herself. Only her body remains. Sex.
The outcome was inevitable.

Ultimately the latest stage of this cultural process affects man more than ever.
Now that the princess is being publicly “rescued” and turned into a battling soldier, man as to be destroyed by representing him as a potential violent rapist, an incompetent stupid daddy (Simpson, Family Guy…) or a bestial ogre succumbing to his own sexual or murderous urges. The embodiment of Eros and Thanatos.
In other cases man falls to the other side of the coin and takes the spot that woman left vacant. He appears as a castrated, shaved, metrosexual puppet on advertising posters.
In the end he’s as sexually objectivised as women are.

These are the themes we are being fed in many forms through fashion magazines, TV shows, popular novels, daily news, movies, comic book characters, political speeches…
As long as men and women are believed to be a dichotomy this type of portrayals will go on, unleashing endless debates, clashes and contradictions.

There are reasons for all this, and they are certainly more complex than what can be demonstrated here, but this is not the place to dive deep into the sociopolitical roots of the phenomenon. The point here is not to provide answers nor take sides, but to raise an issue about certain paradigms that are often given for granted or wrongly dismissed as “human nature”.

I’m surprised when video-gamers say that chain-mail bikinis are not realistic. Surely they aren’t protective in battle, but what kind of realism are they talking about?
The Red Sonja icon is actually a very fitting representation of the contemporary idea of woman (and of man consequently) when we keep into account all of the above. In that sense it’s very realistic, or rather appropriate.
The point is not to dress her up to quiet down fiery feminists, but to understand who or what she represents, because only through this analysis the spell can be broken again.

It’s interesting to notice that traditional Tarot symbolize women in several cards, but the archetypal ones are the High Priestess and the Empress. Summarizing: the first representing intuition, the second representing the motherly creative womb.
Doesn’t it sound more fitting? I can gladly say that the wonderful real women in my life can be represented by these two Tarot cards, rather than a dissociated blood thirsty Black Red Sonja Widow. 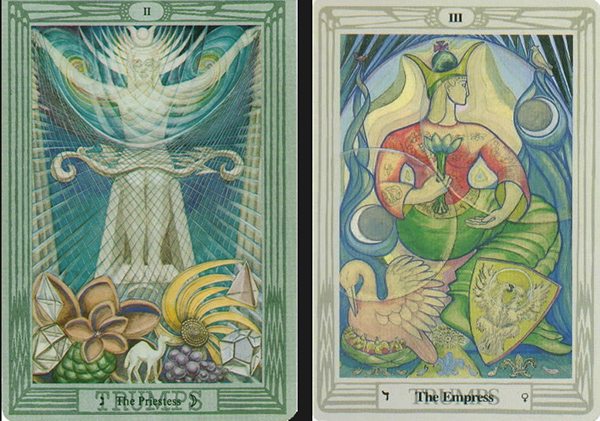 So why is the Red Sonja character still being proposed again and again in different incarnations?

Red Sonja is sexy and fun to draw, but here’s why illustrators have a key role in all this.
While it’s natural for certain symbols or motifs to arise as expression of cultural movements, once such symbols become commercial stereotypes and are repeatedly imposed to support a company’s traditional public image or to profitably draw all the possible juice from a trend, they become subliminal advertising, with all its ideological repercussions. They become crystallized ideas in the collective instead of following the movement of insightful individual expression.

The need of coming to this understanding is now more important than ever, because media is feeding us symbols every day, but we hardly have the chance of exploring what they truly represent, causing a most severe neurosis and dissociation.
If art has one responsibility it’s precisely that of sanitizing the relationship between man and his symbols.

Sadly, too often we hear the intellectually lazy mantra: “It’s just a game/a movie/a comic book”. If that’s the case and art is reduced to just being the servant of that, then it truly is an overrated activity.

By becoming conscious of our modern iconography, symbols can gradually find their place in the psyche. Dualism is reconciled.
The individual can still use them, but through this understanding the symbol will go through a metamorphosis according to its archetypal connotations, not to the regurgitated ideas of consumerism, collectivism, political dogmas or ideological propaganda.