The word “Logo” comes from the greek “logos” which means “word” or “speech”. Isn’t it interesting? Why do we use this term to describe visual symbols like corporate logos?

In fact it’s not surprising, because the mind communicates through symbols. Symbols are the true language of the human psyche. Visual symbols have a particularly powerful effect on the mind because they get straight to the subconscious.
Symbols are timeless. They are the very fabric of the psyche and they speak through generations in the form of Mythical stories.

The ancients preferred to transmit knowledge or tales in the oral form or through evocative iconography. The spoken word doesn’t have a lasting form, but it’s born in pure freshness. It arises in the present, for the present moment.
There was a reason for this. 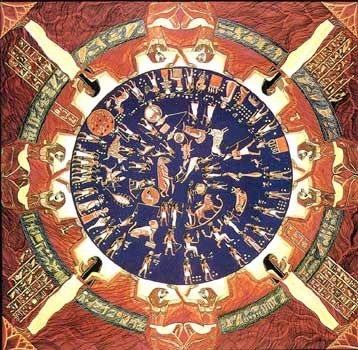 An oral storyteller lets words be shaped by the moment and inspired by imagery (archetypes). In doing so he keeps the Myth alive. His memory taps into the substance of the story he’s telling, instead of being a schematic repetition of events.
This is what kept folk tales so lively and powerful through the centuries.

It’s hard for us to understand this approach, because we are used to the written word as the only way of transmitting knowledge. This type of transmission can be useful, but it encourages repetition through memorization and dooms understanding and integration of the message.
It gradually disconnects us from the inner voice.

In our modern times we are being constantly flooded by sounds and images hammering our senses restlessly. Everything is recorded and sealed in time. We live in fear, desiring to come as close as possible to immortality or at least to the illusion of it by sealing it in written or recorded form.

However, we don’t realise that nothing is more doomed than something born in time, for time. The oral storyteller isn’t concerned with his own mortality or a written name on a piece of paper. His only desire is to be a medium of the Myth, as the symbolic voice of the whole of humanity, because a man who’s well acquainted with the Myth has a chance to find harmony between himself and the world.
Humanity itself isn’t eternal. However the universal laws and its archetypes are.

Carl Jung and many others have spoken about the archetypes of mind, but the ancients knew about them already and expressed them in many ways. They had studied the laws of the cosmos and man by studying nature itself, its geometrical harmonies, its numerical expressions. Stories were born out of this understanding.
They never considered man as an exclusively intelligent being whose only goal is to dominate a dead and dumb world, but as an integral part of the cosmic dance itself.

Getting consciously reacquainted with the symbol is vital for anyone dwelling into the activities called the arts, but these days even in this field we see too much homogenization, thematic repetitions, conformity and the horrible politically-correct.

The internet itself is a double-edge sword that might give voice to some minorities, but also nullify individual expression by encouraging the hive-mind mentality through the viral propagation of standardised ideologies.

Modern artists are seldom the voice of inspiration, the earth-shakers of social dogmas or storytellers; we just act according to acquired concepts and ideas we blindly embraced somewhere in life and never questioned. We are our own censors, too busy running towards flags before even wondering who or what the runner is.
We are the rats misled by a vicious piper who’s playing the most sacred of instruments (the symbol) against us, because he knows we can’t resist the call.

Myths and Symbols don’t belong to anyone, they are the voice of humanity.

“It is the artistic mission to penetrate as far as may be toward that secret ground where primal law feeds growth.” – Paul Klee

Artists more than anyone should consciously bath into symbols and myths like the ancients did, because if they don’t, who will? Who will be the Mercurial messenger of the Gods?