It’s been a while, eh?
I didn’t expect to finish anything else before the end of the year, but here it is.
This one is called “Blue Seeds”. 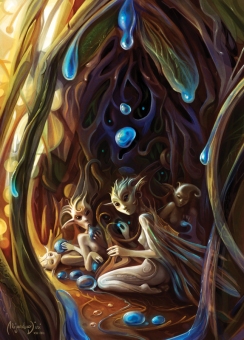 I felt like opening an old sketchy thumbnail I had done two years ago for an illustration about fairies (the one that I later named “Fairies & Berries”) and I saw that this version was still appealing to me, so I decided to finish it.
I ended up working in a different way, less realistic. I don’t know why it happened but I went along with it and I enjoyed the process. It’s not the first time I do it.
It’s a tendency I’m adopting more and more often. We’ll see where it leads.

by Alejandro Dini in Finished work, News
Leave a comment