It took a while, but I finally finished this illustration of Shakti.
While I’m not a hinduist, I do like how they symbolize and conceptualize certain aspects of life.
Hindu deities are rich in symbolism and multiple meanings. What I decided to depict about Shakti is the feminine energy keeping the masculine serpent at bay, but not annihilating him. Both are needed.
I’ve added some more stuff in it, but I prefer not to be too wordy and just let it speak for what it is. 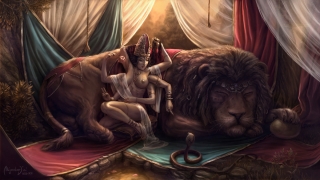 I’m glad I can finally move on, because I spent too much time on this work. I was struggling on it for some reasons, to the point where I lost my sense of judgement and had to ask my “illustratrix” friend Cinzia to tell me what she was seeing. It helped.
Sometimes I think that artwork, as anything in life, isn’t produced by a single person, but by the union of more than one intuitive and observing mind.
It’s ultimately a collective work. Even when we sit alone in our room or studio we are never lonely.