I finished one more illustration based on a famous fairy tale: “The Little Mermaid” by Andersen.
The actual story is more dramatic than its Disney counterpart. There’s a religious undertone to it, something rather common in Andersen’s tales.
I personally don’t resonate with religious themes, they normally don’t inspire me to do anything of interest. However in this story I found an element that I liked, which is what I depicted.

The Little Mermaid’s martyrdom (represented through the story by her constant bleeding and initial sacrifice to enter the human world) well represents the condition of women (or better, the Yin energy) in our male dominated societies.
Earth itself (“Mother” Earth) is constantly being sacrificed by chauvinistic male imperialism, in the name of an illusory expansion with no end that only bring destruction.
On the contrary, the female side (or the divine Shakti if you like) is a creative force that now more than ever should be restored. Art itself is Shakti, because art is creation.

I realized that subconsciously this has been a topic I’ve always more or less represented in my illustrations, because I’ve always felt the effects of these unbalanced energies all around me, particularly in society.
It’s the story of the world, isn’t it? I guess we already have an idea of where it leads. It’s time to consider changing our points of view in life and rebuild ourselves and our perceptions. 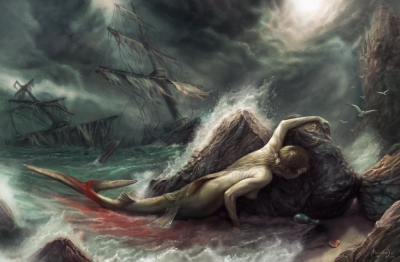 by Alejandro Dini in Finished work, News
Leave a comment