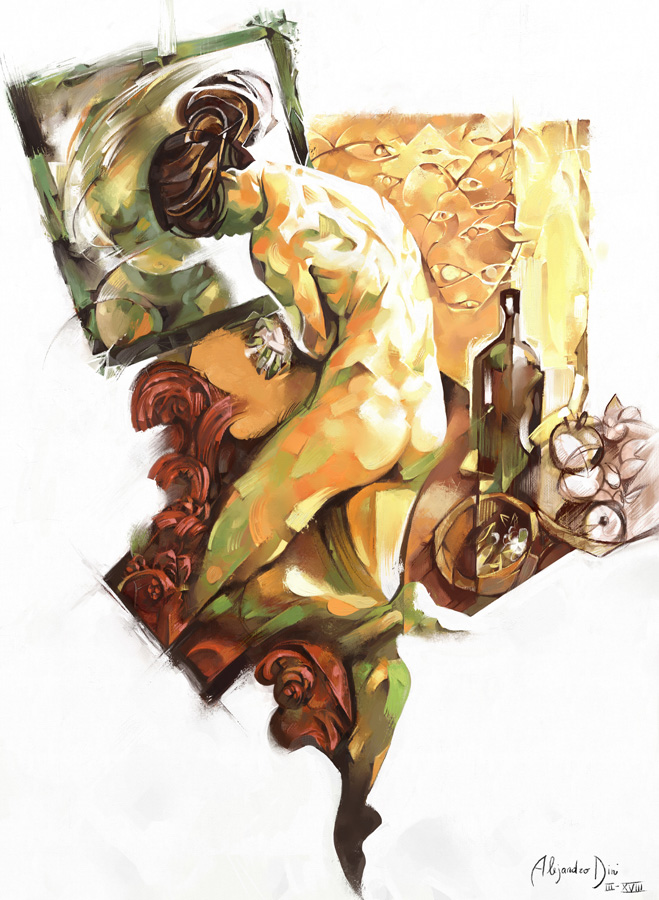 I kept this in my hard disk for a while after finishing it. I wasn’t entirely satisfied with it, but at the same time there were things I liked. I thought I needed some time to let it “mature” in my mind. Sometimes it happens when working on a piece for a long time. This one also had a particularly strange genesis.

It’s a reinterpretation of a rather sketchy painting by Pierre Bonnard in 1930. Despite being consider a post-impressionist, what struck me about his “Nude Bathing” was the strange reflection on the mirror, which didn’t seem to match with the pose in front of it. It looks like an expressionist painting for the intensity of that yellow and also surrealist for the image in the mirror.
Also, unlike other paintings by Bonnard where he paints his bathing wife and only model, this one seemed like a breach of the intimacy of bathing, as if for once he caught her in a moment of vulnerability and reluctant to pose.

My wish to paint it again isn’t at all an attempt at improving it (what an arrogant act would that be!), but to emphasise the elements that I found curiously hinted in it and made this a rather unique work for Bonnard, and close to the themes I enjoy to explore in my own work.

by Alejandro Dini in Finished work, Images
Leave a comment