“Even I could make that!”, said a buffoon in front of Blue Nude II, by Henri Matisse.

How many times do we have to keep hearing this remark whenever a Matisse, Miro’, Rothko or a Kandinsky is presented? Haven’t we all bathed in 20th century art long enough to understand how photography deeply affected the role of visual arts?
Haven’t we opened our hearts and minds wide enough yet?

Many of us might have been hit by this dark mental voice a few times in our lives while observing some strange works of modern art, but one thing is to recognize it and dismiss it, another is to approve it, utter the words and make it a fixed point of view.

I could sit here for hours trying to justify Matisse historically, trying to support my claims with research, but it’s not necessary. I will just comment on Blue Nude II and explain why I like it and why the insignificant dimwits who say “I could do it too” actually can’t.

First of all: Blue Nude II is a series of works of cut-outs and collage. A late work by an old and ill Matisse who was confined to a chair, unable to work with brushes. Yet his drive to produce artwork didn’t stop him and he started exploring other techniques, like this one.
But let’s forget that too. Let’s just look at the work.

As someone who’s been working as illustrator for many years, questioning my process, style, approaches, color and forms, I’ve come to admire artwork that achieves great synthesis of form and expression. I dream to come to such heartfelt simplicity. 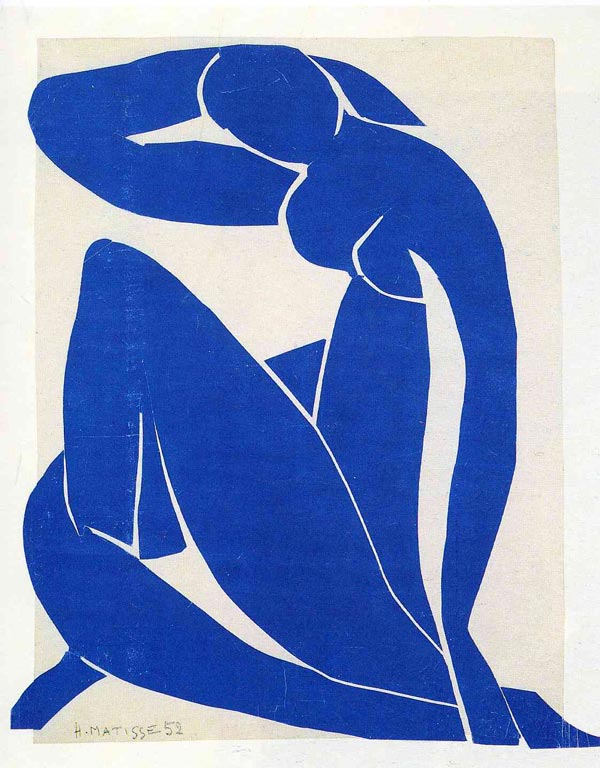 When I look at this particular take of Blue Nude II I’m fascinated by the wonderful composition. How the whole of the figure fills the canvas and yet leads the eyes through each form in a circular manner or spiral, from the elbow down to the body and thigh. Ultimately the knee points up to the elbow, guiding our eyes to the top left corner again.

I’m fascinated by the use of empty space between each cut-out and the overall use of negative space which leaves enough “air” around the shapes as to make the composition dynamic and yet full.

Finally I’m charmed by the elegance of the female figure arising out of this and the great touch of the lower leg that becomes a mere curve, like a parenthesis below the entire body, as to sustain it.
The choice of that deep blue is the final coronation. A woman colored like the night sky. A celestial figure reminiscent of Nut, the Sky Mother, or the vitalizing and purifying waters of the feminine, or even a redeemed Eve.

All this has been carefully pondered by Matisse, as the few versions of this work prove. It wasn’t a random attempt. It was a study of forms, composition, color and expression.
It can be achieved precisely because the figure isn’t realistic, and yet we all see a female nude there. We can also notice his grasp of anatomy because the choices and liberties he took in reshaping the body respect the overall harmony of the figure. Magic of perception.
Matisse might have wondered how to push the boundaries of formal synthesis as far as possible while maintaining the elegance of the female body in this representation.

When I look at work like this I do sense it comes from many years, even a lifetime of experience. If someone out there can’t sense it there’s nothing I can do or say here to change their minds and I have to surrender to the sad evidence that I encountered someone with little wit, a quick tongue and a dry soul.

Let me add another example, perhaps even more striking.

I visited the Fundacio’ Joan Miro’ in Barcelona, twice. Once as a kid and again a few years ago.
I enjoy Miro’s body of work, but one of the paintings that struck me the most was this: 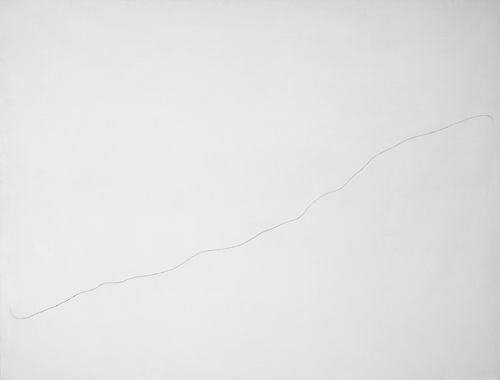 I couldn’t forget this piece, it remained engraved in my memory since I was a kid. It truly hit me. But why? A line?
When I saw it again a few year ago I observed it carefully, to possibly understand what led this man to produce such a puzzling thing.
It’s immense, taller than the ceiling of my apartment: 267,8 x 352 cm
At first when you enter the room it looks like a mistake or a forgotten canvas in a place under construction, and yet there it is, with its title: “Painting of a white background for the cell of a recluse”
Year 1968. Miro’ was 75. A life statement.
He had seen war and gone through the dictatorship of Francisco Franco. Miro’ had always been politically active and very much lived his era as a Spanish man who couldn’t properly find a reason for art to be ideally “beautiful” after knowing war and oppression in his own country. His life shaped his style and themes. There’s war and dreams of freedom all along his artistic journey.
He was a recluse among his own people.

I went close to the giant painting and observed the line: I couldn’t discern the brushstrokes. It was a perfectly even line that ran across the canvas like a scar.
I imagined this elder man climbing on a ladder with a little round brush and a black paint tube in his hands, slowly drawing this eternal line, stroke by stroke. And he did it three times: there were two more canvasses like this in the room.

And I felt the paintings and loved the man.

So to you, smart buffoon who “can” paint Miro’ and Matisse, I ask: do you think you can do this too? A life dedicated to art, through war, to end up making such a statement of your entire work by the age of 75?

Those who say “I could have done it too” can’t certainly hold a pencil in their hands in the first place, but should also be aware that even a Mona Lisa can be reproduced to acceptable levels (to the untrained eyes). Replicating work isn’t a great feat, no matter the initial difficulty.

Many youngsters in art academies these days reach immense technical levels of realism. If Da Vinci were here today he would be astonished by the ability of many art students who had early exposure to tons of artworks thanks to how fast media travels.
Certainly a great advantage of our era.

The simpleton who claims he can paint a Miro’ never did so, nor will, but more importantly he wouldn’t be able to come up with it, because in order to do so he ought to be a true artist working for decades. The deluded fella ignores this, obviously. To him it’s just a matter of technique. Art as a gimmick, a feat of practical difficulty.

I know I can’t paint Blue Nude II, because I don’t have that type of “voice” in me. I have another, and for this reason I admire the work of those who dance their own song. Each artists follows his/her inner voice.
So the verb “can” and “could” acquire an entirely new meaning in this context. No longer signifying practical ability, but vision.
Something the buffoon has never experienced.

The final defense of the buffoon is: “Well, it’s a matter of taste and I don’t like it”.
He attempts a retreat into the unreachable corners of “personal taste” knowing very well that, despite his claim, he would never sit and actually replicate the painting.
He has no drive nor passion for that.

Why is it that most of the times these comments come from people who never drew?  Makes us wonder, and here comes the bitter side of it.

The modern technological era we live in has accustomed us to admiring great works of technique and technology, but often desensitizes us to the beauty of subtlety. We live in a such a sensorial cacophony, with our neurons rushing and jumping from stimuli to stimuli that as soon as things slow down we collapse in numbness, unable to perceive a world that isn’t shouting at our faces.

In this situation the type of art commonly appreciated is realism because along with its merits it’s intelligible but complex enough to engage us for a few extra seconds and perhaps even capture us into a fantasy scene, out of our daily monotony.
The commoner expects everything to be recognizable and somewhat familiar. Illustration and commercial arts survive fairly well in this sense, because they are conceived to be comprehensible by the masses. Unfortunately they don’t leave much room to aesthetic exploration. It wouldn’t sell. 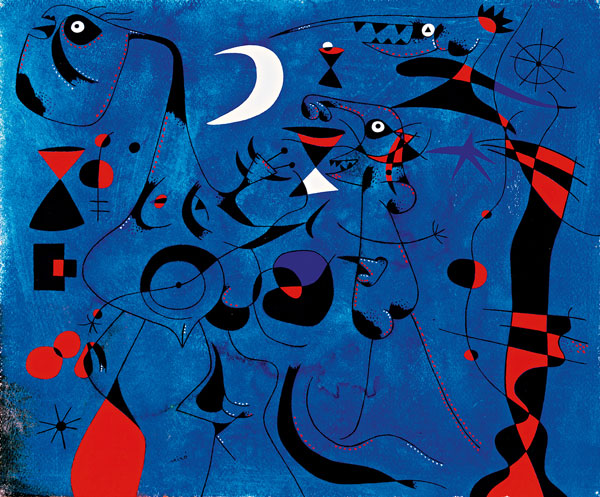 In the end there are not many eyes left to appreciate the likes of a Matisse, a Miro’ or any artists who knew that technique isn’t all there is, because it’s conquerable with practice.
Technique can be taught, but what about the rest? How to conquer the Thing of Mystery that drives artists to their chairs and empty canvasses day after day?  They keep going at it again and again, every single day of their lives, even when they can’t lift a brush anymore, like the old Matisse.
What’s that call?  A painting after another…What’s the seeking about? Perhaps a work that could conclude the journey? Is it even possible? Is the Thing of Mystery truly representable or achievable?
Or maybe we can only do our best to try to capture a quick glimpse of it, walking around the edges of the Thing, circumnavigating the void, to bring back a little testimony of this journey.
And once we’ve half-succeeded and failed hundreds of times, who should judge our skills if we decided to try again not with a thousand strokes but just one?

If Art isn’t about this then what is it?