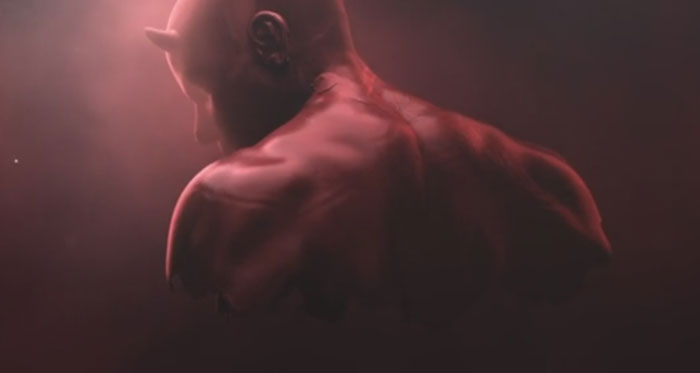 One of my favorite Marvel comic book sagas back in the old days was Frank Miller’s Daredevil, followed by Ann Nocenti’s with John Romita Jr at the pencils. 80s and 90s stuff.
I haven’t read much more after that, but I think that these authors successfully nailed the core of the comic book character.

The essential plot of the Daredevil comic is an interesting allegory on the meaning of Law.
Law, that which regulates relationships and society, is synonymous of the Father archetype. Hence the main plot of the Daredevil comic books revolves around this together with the superego-hero concept I laid out in another article (Heroes and Superheroes).

Matt Murdock’s dad was a boxer killed by gangsters for not accepting a bribe.
The ethical conduct of Matt’s dad is the main sparkle of inspiration and courage that will implicitly sustain his masked alter-ego Daredevil in the fight against crime. Matt admired his dad as his role model.

After the father is murdered what remains are the principles of Law (the unwritten) he imparted to his son. The only thing that will keep Matt company as he grows up alone in a pitch dark world. The Law should actually be called SuperLaw, as is still a law by adoption, active in the unconscious of the super-ego, as opposed to the social law which is conscious.

It’s precisely justice in all forms that becomes Matt’s drive in life, as a way to compensate for the loss of his dad. The longing for his father is the longing for “righteousness” through law and Law. Thus he becomes a professional lawyer to exercise what he believes to be the greatest virtue.

It’s immediately clear that this professional choice is the symptom of an unresolved conflict within Matt Murdock, represented by the impossibility of finding a satisfactory form of justice whether he tries to do so as a vigilante or as a lawyer.
Revenge is not the answer and yet that’s what he intimately craves and represses through all the punches and kicks he unleashes on thugs and gangsters. But the Law of his father towers above him: keep fighting but do not kill, be brave.
A Law that supports but hinders at the same time.

The inner superegoic conflict between dad’s Law and social law becomes an eternal torment that confines Matt to Hell, as a damned soul destined to repeat his actions eternally in the futile search for peace.

This is the only comic book where the commercial necessity of keeping the hero alive in his eternal fight finds a narrative justification.

Matt Murdock juggles the outer and inner law by adopting two identities. He’s a fallen angel, a poor demon cast away from the graces of heaven.
I can imagine that the good old Dante would place him somewhere in Inferno for the simple fact he decided to judge the living in the place of God.

Daredevil is just a tormented devilish soul who’s not at all a force of evil as the name might suggest and like Judeo-Christian dogma wants us to believe when it applied “evil” features to paganism in the attempt to bury it and suppress it. 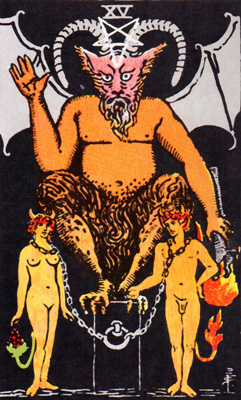 To understand the wider significance of the Devil archetype we should once again look at the Tarot.
Saturn is the ruling planet of Capricorn, represented by the Devil Tarot card.
Saturn as the regulator and structure giver is a father archetype as well, a very earthy and practical fellow, sometimes rigid and restricting, like this goat headed figure keeping humans in captivity (it’s a rather loose chain though; we shouldn’t take him too seriously).

The Devil ruler well suits our “hero”, but finds its most interesting shadow side in Daredevil’s nemesis: Wilson Fisk, the Kingpin.

Fisk is the gargantuan ambitious and demiurgic King of Hell’s Kitchen. He obeys no law other than his own.
He’s the overwhelming force who holds the constraining chains, who dictates, who wishes for his empire to last, impeding progress and movement outside his boundaries.
He’s the truly Saturninan opposer in this story, with his massive and heavy frame. The menacing eater of his own children.

We might notice what an interesting duality presents itself here: Matt’s father dies, Kingpin arises. The same tyrant father Daredevil is fighting within himself. The dark aspect of the regulating principle, the corruption of the law.
Kingping is the shadow father who desires to supplant God (The Law) on Earth. His massive round frame is itself a solar eclipse that towers over the leaner Matt Murdock.

Even the choice of setting the story in Hell’s Kitchen isn’t a casual one, not only because devils live in Hell, but also because a kitchen is the heart of a house, where food is prepared and provided. This is where we find the witch’s cauldron. The city is the womb of the Dark Mother, a fuming forest of cement where we have to face our own shadow. Certainly a place for daredevils.
Both the superhero and Kingpin depend on its obscure and possessive embrace. 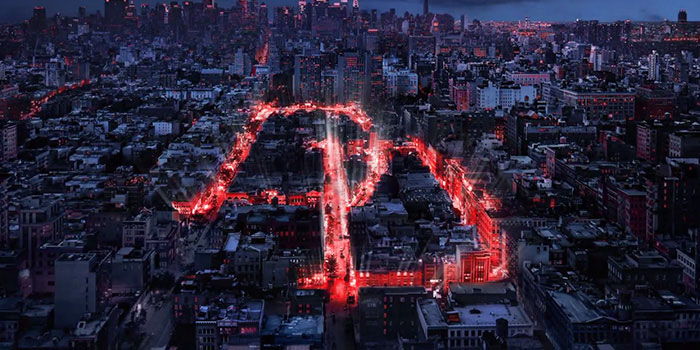 The Father archetype always plays the most significant role in most if not all superhero comic books, often in the form of a missing dad or an obsession with jurisdiction, government or agents of justice.

Most if not all superheroes are orphans, but mostly fatherless.
The good mother is sometimes present in the alternative form of a healer, auntie or carer. Hence the main character finds himself in the tragic condition of one who can’t truly live without a mother figure because a father wasn’t there to cut the umbilical ties and initiate it into an independent adulthood.

The superhero is an eternal teenager, living on the feeble boundaries of social rules, adopting imaginary egos (the mask), unable to establish a lasting relationship with the Other, thus often single or emotionally torn by unstable partnerships.

The father conflict is typical of adolescence, which is why comic books mainly target teenagers and whoever resonates with this psychological situation in later years. But it’s more common than one might think and unfortunately it could last a lifetime.
It’s in fact what we experience collectively when we protest against governmental justice system or ethical standards. We either deal with it as Matt Murdock, working within the parameters of jurisdiction, or as a Daredevil, rioting and throwing punches whenever our sense of impotence overwhelms us.
The latter approach is also to be found in trendy movies like Divergent and The Hunger Games: armed and glorified schoolboys and girls rebelling against a despotic state.
But from this dual stance there’s no way of transcending the issue. We are in Hell’s Kitchen, where Saturn eats his own sons. 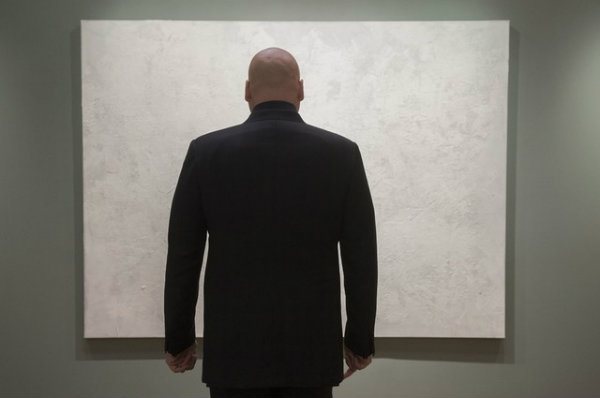 What I personally enjoy about Daredevil is that these aspects are more plainly laid out and the metaphor of Hell and the damned soul seems to paint the plot with the tragic colors of torment instead of falsely suggesting an idilliac solution through the puerile hormonal heroism of rebellion, as that of Divergent and similar movies.

Only one question remains: does Matt Murdock have a chance of finding a way out of this infernal puzzle?
Yes, he does as we all do: when he’ll discover that the outer struggle was a mere reflection of the inner. It will be the first step out of the cycle, out of blinding darkness. But we know there’s no escape from a comic book Hell.