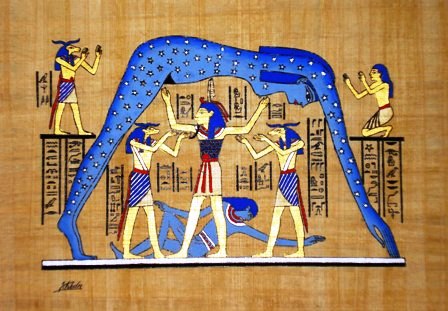 I suggested a friend of mine to ask her five-year-old daughter what the origin of the world was. I was very intrigued by her possible reply, because she’s not been indoctrinated by any forms of schooling nor religion yet.

The question caught her by surprise and she took some time before giving all the answers.
Here’s the dialogue between her mom and the little girl:

Girl: “The world was born from the sky”
Mom: “What’s in the sky?”
Girl: “The sun and the moon”
Mom: “And who are they? Brothers?”
Girl: “No! The sun is the mom and the moon is the daddy”
Mom: “But think again. How was the world born?”
Girl: “I told you, from the sky. Then people and plants came and decided to settle”.

A very cute and adorable answer, but especially very interesting.
The “sky” as the universal womb is present in ancient myths as well. The first that comes to mind is the Egyptian goddess Nut. This little girl’s answer proves how mythology is the projection of the unconscious into the cosmos, a way of explaining life through symbolic analogies.
She’s not been taught to do that, she simply did it once questioned. 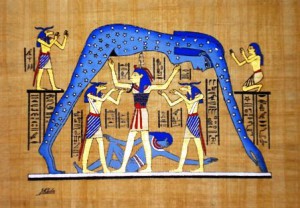 Sun and moon as celestial parents are a familiar theme in many cultures. To her the sun was the mother, possibly because she spends the daytime with her mom and sees her father only at night after work, but there might be further reasons.

She also imagines that people and plants came into the world from elsewhere. Why plants? Her mom told me that the girl enjoys tending to the plants in the house. Evidently she sees them as living beings, equal to people, rather than inert vegetables.

However, even though she’s just five, she already unconsciously adopted the modern western view of the world according to which “the world” and people are separate, hence people had to come into the world as aliens to it. As Alan Watts pointed in his lectures this is generally different in Chinese culture, in which the child sees himself as grown out of the world, like a tree.
For this reason ancient Chinese philosophy has always been about harmonizing holistically, rather than a dichotomy in which one side has to prevail. There’s no ultimate separation between the “in” and the “out“.

There’s more to it if we look at the differences in written language: the horizontal and linearly structured alphabet in the west; the vertical and aphonetic system in China.
Lynn White once added that this cultural difference becomes apparent in the way westerns and Chinese mount their machinery too. The Chinese do it by rotating the parts around vertical axles. Westerns do it horizontally.
Horizontality may suggest the movement of sequentiality and progression. Verticality presents a unique stillness that isn’t that of a body moving forward, hence can only be of the mind and its ideas of the world as essentially still in its endless cycles.

In short: language is the manifest body of the unconscious. We can understand the psyche by studying how we speak. Change a word and you’ll change the world.

I need to clarify that by comparing the girl’s story to Egyptian symbols I’m not suggesting that Egyptian mythology was infantile in nature. Quite the opposite. These are symbolizations that have been with us since the beginning of times, often acquiring new masks, but always companions of the human journey.
However in today’s society we got ourselves entangled into the liturgies of institutionalized myths that never belonged to our lands to begin with. Most don’t speak to us anymore and they’ve been consequently reduced to petrified rituals for the weekend.

Paraphrasing the great Joseph Campbell: true mythology is not purely a fable, but a living thing that enriches our lives.
Wouldn’t it be refreshing to see the world once again as my friend’s daughter does? Not to believe in it as “truth”, but to rediscover it as a living story that brings sense and meaning into our unique journey.
This is where art comes from.